It’s in the AppStore !

What a great way to keep informed about new songs featuring the Native American style flute. It’s FREE and painless!

“Tracking the Bear” at ReverbNation

I decided to put the title track of this album-in-progress as an exclusive download on ReverbNation. I have become a big fan of ReverbNation – it’s a great venue for artists to share. If you click on the “Tracking the Bear” song link it may ask you for your email (don’t be afraid), and you’ll be able to hear the track in its entirety months before the album is ready.

Anyway, I am going to stop telling myself that I am going to take a break from recording; every time that I do, I find myself right back in the studio. I think it because the music seems to act as my aural diary – tracking what I am doing and feeling from-day-to-day.

We smile in my family when my brother takes his annual vacations from Europe to visit us. I think he does this in August because that is the month that they close France! Over the years, as my brother has worked in Africa, I think he has developed a personality that I describe as ‘percussive’ (at least, that’s my take on it).

An intelligent man, fiercely loyal to his family, my brother has (as we all do) certain pecadillos. Among these are his distrust of all taxi drivers, a European resistance to tipping and a compelling desire to expound on the state of American politics. (He has my gratitude for resisting this latter desire in my presence).

As I get older, on the other hand, I search for stillness and an absence of percussion. So when my brother left to return to France this year, I was contemplating our relationship; he as the bear or dragon – and I as the rabbit. And I headed again for the recording studio with the irreverent working title of ‘Pokin the Bear,’ which I quickly discarded in search of another. I settled instead on ‘Tracking the Bear.’ And the music began to manifest with mysterious background sounds which I interpreted as the bear’s cave.

The totem for this work, as usual is a preliminary mock-up of the album art:

The first track starts out with the rumbling of a large, cavernous space. The rumble is broken by the breathy trill from a Native American style flute made for me by Geoffrey Ellis of Earth Tone Flutes. The musical textures evolve invoking a celestial mood and then to a seductive percussion with cascading melodies. I pulled a Fender American Standard Stratocaster into the track for a couple of twangs.

Of Hearts and Talking Sticks

I thought that I would take a break from recording for a short time – but then I saw a talking stick in my mind’s eye. I am not sure where I heard about the lore of the talking stick; many cultures have employed something like it. The possession of the talking stick gives a council member the right to speak uninterrupted until the stick is passed to the next member. Possession of the stick is also said to empower the holder with the gift of clear communication.

Maybe because my brother was visiting me this year again and I was hoping to chat with him quietly heart-to-heart. There is no one in my life left who knew me as a boy; all of those friends are gone, and prematurely so. And although his visit was better in this regard than last year’s hotly delivered political opinions, I thought that maybe next year I will have a talking stick ready. Then maybe the ritual will let us shed the topical and experience the essential. That may be a tall order in an election year.

So I therefore have the working-title for the next flute project: “Talking Stick.” In this album, I will use the Native American style flute to scrape the surface of my personality away and attempt to get to my deepest feelings. I will use some orchestration, but minimally as a balm to a burn.

Typically, when I start a new project, I try to find or make an image that inspires me during the recording phase of the work. In this case, on a rainy day in the monsoon season of Arizona, I found a rattle made by Judy Derosa of Yosemite, and placed it on a sacred textile that was made in Peru and used for the Despacho ceremony. The Despacho is the shamanic ceremony of the Q’ero, the modern day Inca that is intended to bring balance into one’s life. The image that I made is shown below: 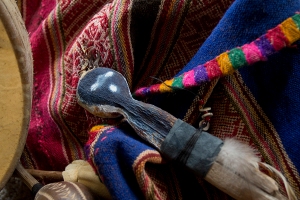 To begin the album, I used an EZ-Anasazi flute in the key of A made by my friend and master musician and craftsman, Stephen Deruby. You can hear the unnamed first track of this as-yet unreleased album by clicking here.

When I record for this album, I am hoping that the melodies will track directly to my heart and clear it so that I may play clearly, without artifice. I hope you enjoy it.